I’ve had to pivot quite a few times because I’m relatively inexperienced. Sometimes I just don’t know if an idea is good or not until it’s in my hands.

I’ve always wondered if I should stick to an idea and commit to it until the end no matter what.

Oh well. Too late! That’s only something that me from another dimension will know. I’ve already pivoted around 5 times.

When we first started working on Saleblazers, it was called Budget Hero. You played as a supervillain-turned-shopkeeper, and looked like this:

Shop owners would come to you for help. Your job is to identify the problem and fix it. 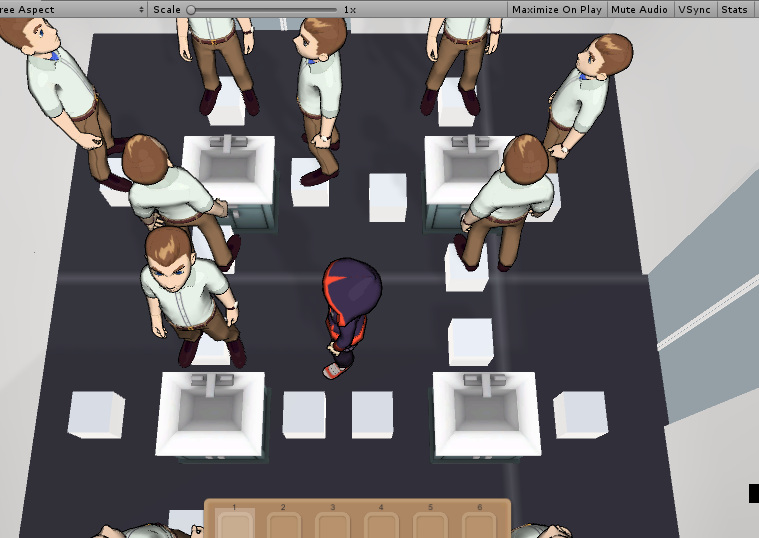 Sometimes it was because they’d placed the cash registers too far from the goods. Other times it’s because the shop was filled with a variety of disgusting messes for you to clean up. Each level was a self-contained puzzle. 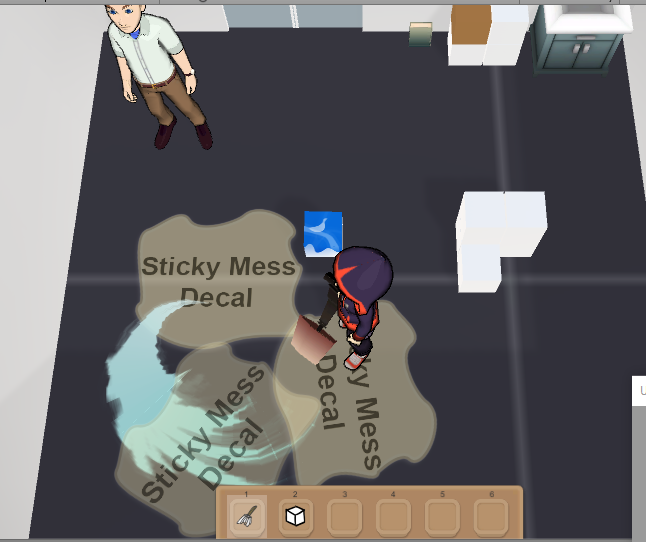 Rent ticked down in the background, which pressured the player to plan quickly.

In between these small hand-crafted levels, you’d develop relationships with friends and enemies scattered throughout the game’s hub worlds.

There was a player-owned shop for you to return to at the end of each Persona-like day. Through playtests, we learned that players preferred running their own shops far more than fixing other people’s shops.

It made a lot of sense. So, we pivoted.

More emphasis was placed on the player shop, and contract levels were moved to the side.

The game was also renamed to Please Buy Something, since over time it became less about superheroes and more about shopkeeping.

Plus, Budget Hero kind of sounded like a mobile game.

We iterated on it.

We had no combat, despite the tried-and-true formula of shopkeeping -> dungeon -> shopkeeping of existing games in the genre warning us of our mistake.

I thought I could pull off a game without combat, but I was wrong. The synergetic contrast of tense hostility and calm coziness is what makes shopkeeping games so satisfying for me, but I ignored that in my quest to make a peaceful game.

It’s hard to create a successful game that you don’t personally find fun.

The narrative beats and cinematic cutscenes were also far more difficult to implement than expected. It’s hard to convince the player from spam-clicking through series of text that we put countless of hours in, without greatly reducing the narrative to a simplified form.

So, we pivoted once more.

We placed more focus on pure gameplay over narrative.

And a crime system with police AI.

It didn’t help that we opted to use Unity, which had no stable networking solution at the time. We had to use a modified in-house version of Mirror, which was already a heavily modified version of UNET.

But it was worth it. Already, the game was a lot more fun.

Not too long after celebration, we found another huge problem.

Everything was pre-built for you from the start. We gave the player a run down shop to start with, surrounded by an entirely completed community center.

The game was fun as a little tech demo to simulate what it’s like after an 8 hour session, but, as a full-on game, it sapped away a lot of what makes playing games enjoyable.

What if you disliked what we gave you?

What if you wanted to build a weird shop?

What if you wanted to build a 10 story-high shop?

What if you wanted to build a shop next to a lake?

What if you wanted to make a shop where customers would fall into a pit if they decided to shoplift?

It wasn’t possible, because we gave the player everything in a very static way and didn’t have a construction system. The whole point of our original pivot was to allow players more self-expression in their gameplay.

The player can now build their shop from the ground up piece-by-piece.

Teleporting via a train station wasn’t that fun either, so we made the game open-world for the player to seamlessly travel around.

There were (and are) a lot of problems with wrestling a small-scaled singleplayer game into a behemoth multiplayer open-world shopkeeping game.

But, we kept iterating.

Instead of being locked in concrete jungles, enemy factions now have small towns in distinct biomes because we aren’t limited by train fast travel.

Environments also look a lot less squashed, because we don’t have to design for a top-down perspective anymore. For the limited amount of cutscenes that we do have, it’s a lot easier to make them look good now.

An animator and gameplay designer joined our team, so we could finally give more much-needed attention to our combat.

We also added some “animals” to our game.

Everything’s finally starting to fall into place. There are some issues that pop up occasionally, but nothing so devastating as being totally boring.

And here’s what Please Buy Something looks like now.

Please Buy Something changed to Saleblazers for a better description of the overall action + exploration oriented direction of the game at this point.

Maybe next time, I’ll have a proper pre-production phase.

There are more scuffed moments to share, such as when we:

But that’s for another time, because I have to get back to developing the game.

I hope you enjoyed reading this. Maybe when I have more time, I’ll share some more cool things we learned during development.

No comments to show.